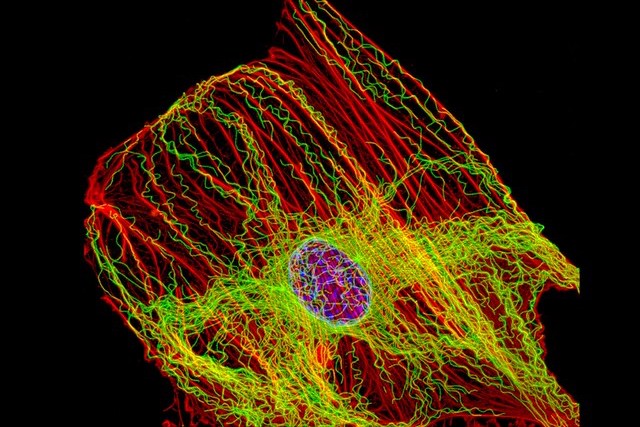 Fibroblast growth factors (FGF) were first detected as mitogens in pituitary extracts [1] and its family consists of 22 members in mice and in humans [2]. This protein family participates in cell proliferation, differentiation, motility, and survival [1]. FGF/FGFR (Fibroblast Growth Factor Receptor) signaling pathway dysregulation is related to both developmental problems and cancer [3]. During development, FGFs have an important role in morphogenesis by controlling cellular proliferation, differentiation, and migration, while in adults, they act as homeostatic factors involved in tissue repair, regulation of the nervous system, and tumor angiogenesis [4].

Fibroblast growth factor-10 (FGF-10) is a secreted glycoprotein whose effects are applied through two fibroblast growth factor receptors including FGFR1B and FGFR2B, with low and high affinity, respectively [5]. This growth factor is a mesodermally derived mitogen which contributes to epithelial-mesenchymal interaction (EMI) during embryogenesis [6]. The crucial role of EMI in the organogenesis of several organs is well documented [7]. FGF-10 is expressed in the mesenchyme and exerts its influence in a paracrine mode in the epithelium [8]. The signaling pathways of FGF-10 are PLCγ, PI3K–AKT, and Ras/MAPK [8]. The PLCγ signaling pathway affects migration, adhesion, and cell morphology [9]. The PI3K-AKT signaling pathway also adjusts cell survival and fate determination, while the Ras/MAPK signaling pathway regulates cell proliferation and differentiation [9].

Fluorescence in situ hybridization (FISH) analysis was performed in order to identify the location of the FGF-10 gene and the result mapped the FGF-10 gene in to the 5p12-p13 locus of chromosome 5 [10]. The isolated cDNA of FGF-10 from human lungs encodes a protein that consists of 208 amino acids [11] weighing 19kD [12], with a high sequence similar to rat FGF-10 (95.6%) [11]. In addition, a hydrophobic plot analysis indicated that both the human and the rat FGF-10 possessed the hydrophobic N-terminal including 40 amino acids that possibly act as a signal peptide [11]. This review presents the importance of FGF-10’s different functions in terms of development, disease, wound healing, and therapeutic value.

The analysis of the results of Fgf10 and Fgfr2b mutant mice and null mice show that the FGF10/FGFR2b signaling pathway has a significant role in the development of branching organs such as the pancreas, mammary gland, salivary gland, thyroid gland, and lungs [13]. This is supported by reports of mice with Fgf10 deficiency showing various tissue defects in the lungs, limbs, and mammary glands [14]. FGF signaling is also involved in neural crest induction which leads to the formation of the central nervous system and future epidermis [15]. Blocking FGF signaling in the explant prevents the induction of neural crest in response to paraxial mesoderm signals [16]. Within tongue skeletal muscle morphogenesis, TGF-β induced FGF-10 signaling in cranial neural crest plays a vital role in myogenic progenitor development via the adjustment of tissue-tissue interactions [17]. Also, a special pattern of FGF-10 expression in the adult mammalian brain adjusts neurogenesis and preserves neurogenic potential [18]. By regulating well-timed differentiation of radial glia, transient Fgf10 expression controls the length of the primary progenitor expansion stage, initiation of neurogenesis, and the number of progenitors and neurons fated to specific cortical areas [19]. Fgf10 also acts as a key controller of the neuroepithelial to radial glial transition and the subsequent rostral forebrain size [20].

Table 1 demonstrates the importance of FGF-10 functions in the development of several organs. 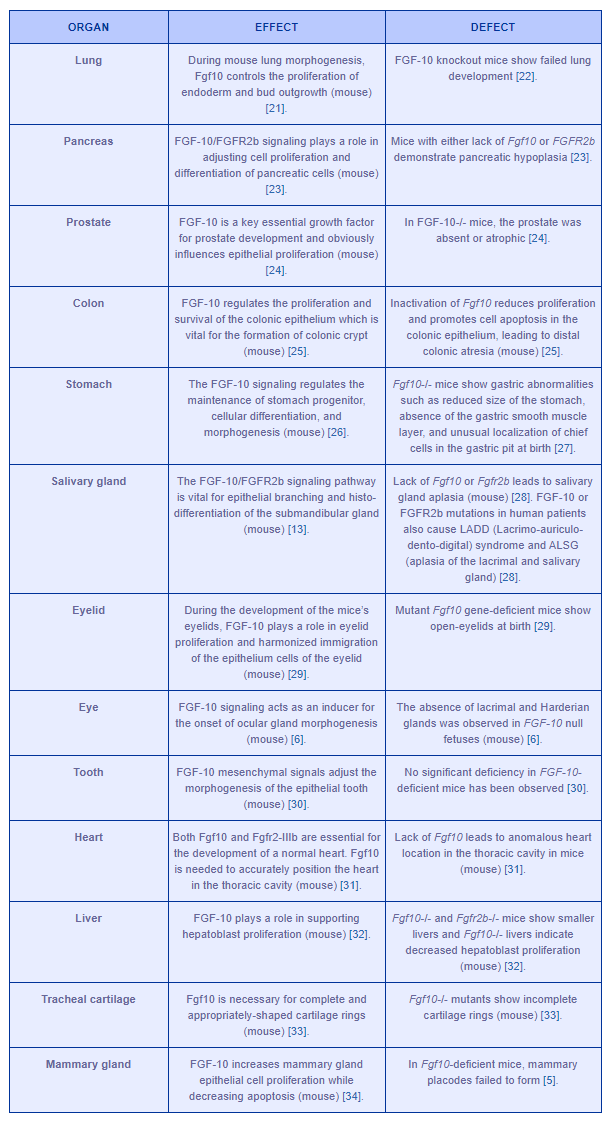 Table 1: FGF-10 key roles in the development of several organs. Difficulties in either FGF-10 or FGFR2IIIb lead to anatomical and physiological anomalies.

FGF-10 has an important role in the proliferation of cancer cells by enhancing the transition of G1 to S phase and thus preparing the cells for mitosis [36]. By applying immunohistochemistry and in situ hybridization, mRNA of FGF-10 was seen in both colorectal cancer cells and adjacent fibroblast of cancer cells [37]. There was no detection of FGF-10 mRNA in normal colorectal tissues which indicates the possible role of FGF-10 in the growth of colorectal adenocarcinoma cells [37]. One in vivo study has shown that overexpression of the FGF-10 gene stimulates the formation of organized tumors with type II epithelial cell features in the lung [38]. Also, a study on human breast carcinomas has shown that Fgf10 mRNA levels have been strongly enhanced in approximately 10% of the tested human breast tumors, proposing that Fgf10 may play a role in the oncogenicity of a subdivision of human breast cancers [39]. FGF-10 has an important role in some other cancers such as pancreatic cancer (the FGF-10/FGF2IIIb signaling pathway stimulates cell immigration and invasion in pancreatic cancer) [40] and prostate cancer (an increase in mesenchymal FGF-10 expression promotes formation of well differentiated prostate cancer) [41].

FGF-10 is also known as a significant factor during type-I EMT (happens during embryogenesis) and it is also important in type-III EMT (happens during cancer and metastasis) [36]. EMT is considered a process in which epithelial cells lose their connections and acquire the ability to migrate freely and adopt mesenchymal phenotype [9]. EMT happens during embryonic progression, as a physiological response during wound healing, and is also essential for the development of cancer [42]. In fact, it is a significant process in cancer metastasis, interrupting cell-cell adhesion and enhancing tumor cell invasion [43]. FGF-10 is an important factor during both type-I and III EMT [36]. FGF-10 may stimulate EMT via Ras/MAPK and AKT/PI3K/mTOR signaling pathways [36]. The PI3K/AKT signaling pathway is necessary for FGF-induced EMT and cell survival [44]. FGF-10 expression reduces gene expression of E-cadherin (responsible for epithelial adherence connections) while increasing Slug (SNAI2) and Snail (SNAI1) (two transcription factors known as EMT- inducers) [36]. The loss of the E-cadherin expression is one of the important agents all throughout the EMT process in both development and cancer [45]. The lack of E-cadherin also enhances invasiveness of tumor cells in vitro, and it is associated with the transmission of adenoma to carcinoma in animal models [45]. In fact, the E-cadherin expression level is inversely correlated with the grade and stage of the tumor [45]. Moreover, up-regulation of FGF-10 promotes cell sensitivity to TGF-β [36]. TGF-β acts as a strong regulator of cellular adhesion by decreasing E-cadherin expression [46]. Overall, increased levels of TGF-β reduces adhesiveness and increases the motility of cancer cells [47].

FGF-10 encoding gene mutations are related to aplasia of the lacrimal and major salivary glands (ALSG), which is a rare and autosomal dominant disorder characterized by atresia, aplasia, and hypoplasia of the lacrimal and salivary glands [48]. ALSG displays symptoms such as epiphora, irritable eyes, recurring eye infections, oral inflammation, dental erosion, dental caries, and xerostomia [48]. Babies with ALSG show no apparent lung disorders [47]. However, mature patients with heterozygous lack of function of FGF-10 demonstrate a meaningful reduction in IVC (Inspiratory Vital Capacity), FEV1 (Forced Expiratory Volume in one second), and FEV1/IVC quota in comparison with the predicted reference values and non-carrier siblings [47]. Genetic variants that influence FGF-10 signaling are also important in determining lung function, which may ultimately have a role in chronic obstructive pulmonary disease [49]. Also, FGF-10 protein defect has been reported in patients with broncho-pulmonary dysplasia, a chronic lung disease in prematurely-born infants, which is one of the main causes of morbidity and mortality [50].

FGF-10 is mainly generated by neuron and microglia / macrophages, and its expression is elevated after a spinal cord injury, especially after an acute phase, which suggests that FGF-10 can be considered as a potential treatment for injuries of the central nervous system [18]. Exogenous FGF-10 treatment leads to the improvement of functional recovery by decreasing apoptosis and also by repairing neurites through the FGFR2/PI3K/Akt signaling pathway [18]. The PI3K/Akt signaling pathway is vital for growth and survival in many biological processes such as early ischemia/reperfusion injury [18]. Moreover, in vivo FGF-10 treatment suppresses the activation of the NF-κB signaling pathway (the main inflammatory mediator that controls the production of TNF-α and IL-6 inflammatory factors in CNS) in the context of ischemic stroke, which results in decreased neuro-inflammation [51].

Preliminary in vitro wound healing examinations have indicated that FGF-10 increases the proliferation and differentiation of human keratinocytes, proposing a possible role of FGF-10 in epidermal growth and differentiation [12]. In fact, accelerated skin wound healing as well as re-epithelialization and formation of granulation tissue are among the known roles of FGF-10 [37]. FGF-10 is the most effective in wound healing compared with other growth factors such as FGF-7 (KGF) and TGF-β, which have been examined in the scar formation of rabbits [37]. In addition, FGFR2IIIb ligands, in particular FGF-10, are strongly expressed during skin wound healing and probably result in an increase in the amount of Nrf2 (a significant factor during cellular stress reply) during wound healing [52]. FGF-10 is also considered a strong inducer of wound healing because of its ability to boost mechanical strength via the enhancement of the amount of wound collagen and epidermal thickness [53]. In general, it has been suggested that FGF-10 acts as a potential wound healing factor for inducing epithelialization in several types of wounds, such as partial-thickness burn wounds, venous stasis ulcers, or skin graft donor sites [12].

The truncated form of FGF-10 that maintains the biological and physiological activity of full length FGF-10 is called ‘repifermin’ [54]. The application of repifermin has been shown as a potential therapeutic method to stimulate angiogenesis [54]. A randomized trial estimating the safety and clinical effects of repifermin was conducted on patients with mucositis treated with auto-HSCT (Autologous Hematopoietic Stem Cell transplantation). The results of phase I/II of the trial indicated that repifermin given before and after auto-HSCT is well tolerated and appears active in decreasing the incidence of mucositis. However, this result will need to be confirmed through larger randomized clinical studies [55]. In this placebo-controlled study, patients who received 50 g/kg of repifermin demonstrated a lower score of worst pain on swallowing as well as on eating capabilities and they also tended to use narcotic pain medication (given specifically for mucositis-related pain) for fewer days [55]. In a randomized, placebo-controlled and multicenter trial, repifermin was given to patients in order to evaluate its effect on chronic venous ulcers. Results suggest that it was also well tolerated and that it accelerated wound healing when compared with the placebo [56]. These results were more significant in patients with a primary wound zone less than 15cm2 and with wounds less than 18 months old [56]. Furthermore, repifermin does not promote proliferation of FGFR2IIIb (KGFR, Keratinocyte Growth Factor Receptor) positive human epithelial-like tumors (in vivo and in vitro), which underlines its potential to specifically target normal epithelial tissues. This suggests that medication can be developed for cancer patients suffering from chemo- or radiotherapy-induced mucositis, inflammatory bowel diseases, and other kinds of epithelial tissue damage [57].

FGF-10 signaling is important for cell proliferation, differentiation, survival, adhesion, and EMT: events which are all essential during both embryogenesis and the development of pathological conditions such as cancer. To determine how such a valuable developmental factor becomes active as a malignant factor in cancer and what different factors may be involved, further basic molecular research would be worthwhile. In other words, a true understanding of the FGF-10 signaling mechanism and its significant role during embryogenesis and EMT may suggest a new candidate for a new, targeted cancer therapy. Furthermore, deeper insights into the reparative functions of FGF 10 may have significant implications in the fields of regenerative medicine and wound care.