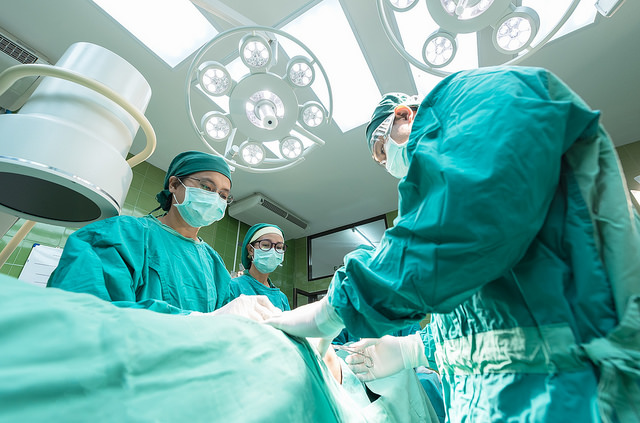 The reclusive radiologist, the arrogant surgeon, and the snoozing anaesthetist… we’re all aware of the stereotypes. This study aims to assess medical students’ perceptions about doctors in a range of different specialties. Medical students are pluripotent stem cells able to differentiate into doctors of any specialty, and their impressions of these different specialties will undoubtedly influence their choice. This is of particular importance for undersubscribed specialties such as Pathology and Psychiatry, whose application numbers may suffer from preconceptions about the ‘type’ of person who enters the field, what their future colleagues may be like, and the opinions others may have of them. In addition, other specialties, while not undersubscribed, may have a lack of diversity in their applicants, because of the perceived ‘type’ of its members.

A 2013 BMJ article discusses the many origins of these stereotypes: the media, gender, role models, and doctors conforming to their colleagues over time [1]. Although diversity amongst doctors is improving, with now a greater proportion of female medical students than male, still only 9% of surgeons are women.

If we are to tackle negative stereotypes of certain specialties, we must first assess what they are.

63 medical students from the University of Cambridge were recruited from the Clinical School Facebook group, and asked to fill in a 1-2 minute anonymous survey. By agreeing to take part in the study, they agreed to have their results analysed for future use. The survey showed participants 10 types of doctor, and asked them to “Please write the first adjective that comes into your head, when thinking about a doctor working in each of these specialties.” The list was: Surgeon, GP, Radiologist, Psychiatrist, Paediatrician, Cardiologist, Dermatologist, Anaesthetist, A&E doctor. At the end they were also asked to select the medical specialty they were most interested in pursuing.

The results were categorised into positive words (e.g. friendly), negative words (e.g. arrogant), and neutral/descriptive words (e.g. female), and displayed in the Word Clouds below (Fig 1), with the size of the word relating to how many times it was mentioned. Some entries were nouns instead of adjectives, but these were not excluded from the analysis. 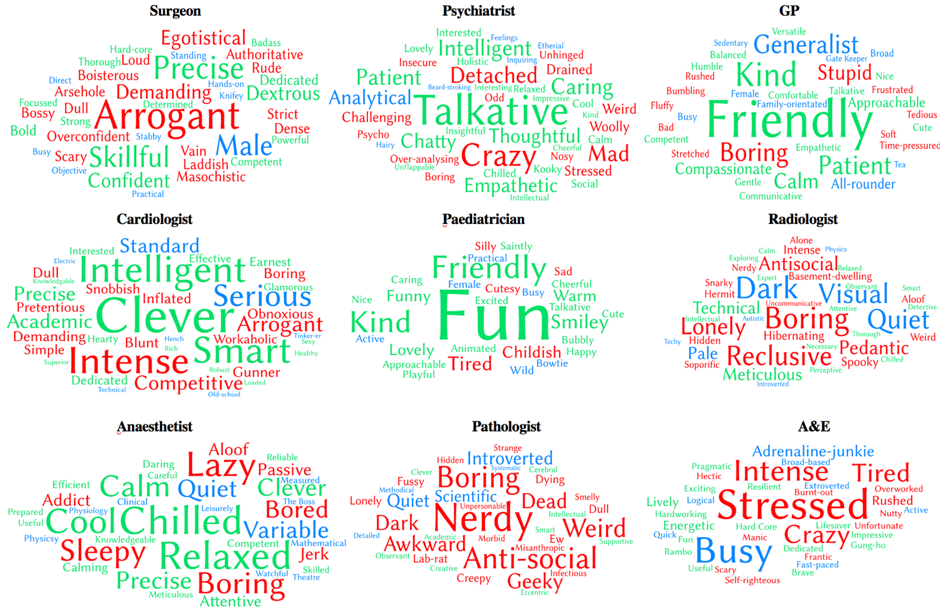 Clear stereotypes have emerged from this study, with some specialties faring better than others. This is highly relevant, since these medical students will be selecting their training pathway in a few years, and will be influenced by these stereotypes when making their decision.

There were a few similar studies, although much of the literature examined medical students’ opinions of the specialties themselves, rather than the doctors working in them.

One 1986 paper [3] had similar aims to this one, namely “to examine the attitudes of a fairly large number of medical students to various specialties”. The students in this study reported attitudes to a similar array of specialties. Some of the results are summarised in Table 1.

On the whole, they are quite similar to the results of this study, but did have some interesting differences. Predictably, the 1986 study has brought up the same gender stereotypes as this one for surgeons and GPs. Interesting differences include surgeons being described as “materialistic” in 1986 but not in 2017 – are NHS cuts to blame for this?

Whereas today’s medical students focussed on the sleepy aspect of the anaesthetist, the 1986 study highlights the anaesthetist’s scientific side, painting them more in the light of today’s pathologist or radiologist. A positive change can be seen with the psychiatrist; the 1986 participants seemed to doubt psychiatrists as legitimate doctors, whereas today’s has focussed more on the psychiatrists themselves as unusual people. Perhaps this reflects modern society’s changing attitudes towards mental illness.

The stereotypes described in this paper also closely reflect those found in a 1981 study of medical students from the University of Manchester, which voted surgeons as the most “domineering and arrogant”, GPs as the most “friendly”, and psychiatrists as the most “emotionally unstable” [2].

Various other papers looked at certain specialties individually. A 2016 focus group about general practice [4] reported that GPs were “sensitive” and “looked down upon”, whereas hospital doctors were “ruthless”. A 2015 paper [5] examined students’ attitudes to radiology, finding that “the stereotype of the isolated, sedentary radiologist persists”.

There was a larger cluster of papers examining pathology stereotypes, perhaps reflecting the fact that they are particularly strong. Predictably, they returned similar results to this survey. A group of Canadian postgraduate trainees in 2010 [6] described pathologists as “boring”, “eccentric”, “socially awkward”, and “morbid”. A 2011 group of medical students [7] similarly described pathologists as “weirdos in bow-ties”, “geeky and boring”, “anti-social” and “introverts”, although did generously concede that they were “very smart and focussed”. This stereotype is not simply a recent phenomenon, since in 1967 a group of American students perceived pathologists to be both “morbid” and “insecure, uncomfortable, and ill at ease with others, and inept at interpersonal communication, shy, introverted, aloof, and cold.”

As the 2013 BMJ Paper discussed [1], there are many possible reasons for these stereotypes among medical students. Firstly, real life. Of course, many of the world’s stereotypes are founded on a (variably sized) grain of truth. Whether this be from doctors being attracted into specialties of like-minded people, or simply blending more into their peer group over time, it is highly likely that certain traits do exist among particular specialists, and that medical students have noticed this.

Another possible source is jokes made about different specialties. Especially for the less visible specialties such as pathology, it is unlikely that most medical students have met large numbers of their members, but they are likely to have heard lots of jokes about them. A 2014 French paper looked at 150 medical jokes submitted from doctors via the internet, and analysed the stereotypes ridiculed by the jokes. Some of these stereotypes aligned very closely with the results of this survey. Anaesthetists were portrayed as “lazy”, “coffee drinkers”, and “less awake than their patients”. Surgeons were “megalomaniacs”, “tyrannical”, and “unthinking”; and psychiatrists were “as crazy as their patients”. There are a few differences, in that emergency doctors were portrayed as “incompetent” and “idiots”, rather than this survey’s focus on being stressed and busy; also that paediatricians were seen as “jaded”, rather than fun and friendly.

On the whole, the stereotypes described in this survey agree with those found in the rest of the literature, both from modern day and from 50 years ago. While some may view the persistence of these stereotypes as disheartening, we are seeing more and more exceptions to the rule in the workplace as the more diverse medical students of today filter through into the medical workplace [1]. Hopefully, in the modern day, these stereotypes are less of a reflection of the current workforce, and more the fodder of inter-specialty banter.