RS is a 96-year-old lady who presented to the emergency department from a private hospital with symptoms of decompensated heart failure. This was in the context of a recent hospital admission for lower limb cellulitis, hospital acquired pneumonia, acute kidney injury on a background of chronic kidney disease (CKD) and congestive cardiac failure. RS has an extensive history of cardiovascular risk factors, notably hypertension, dyslipidemia and type II diabetes mellitus, which had resulted in past myocardial infarctions and strokes. On clinical assessment, her decompensated heart failure was complicated by delirium. A radiograph was taken of her left wrist as RS was suspected of having a wrist injury secondary to a fall during a delirious episode. After discussion with her family and the geriatrics team, she was admitted under geriatrics for ward-based management of fluid overload and a possible superimposed infection.

Figure 1: Lateral radiograph of left wrist. Note the extensive calcifications present in her arteries as shown by the green arrow.

Vascular calcifications, specifically arterial calcifications, can be classified into two categories: medial and intimal calcifications. Medial calcifications are independent of the development of atherosclerosis. In contrast, intimal calcifications are often involved in the atherosclerotic plaque adjacent to the medial layer of the artery and have been implicated in plaque disruption and thrombosis [5]. Medial calcifications are observed more commonly in poorly managed metabolic and electrolyte disorders [6]. Common examples would be end-stage renal disease (ESRD) and diabetes mellitus [6]. Vessels that are less likely to develop atherosclerosis are more likely to be affected by medical calcifications. Examples are abdominal visceral, thyroid and breast arteries [5]. Intimal calcifications frequently occur at sites of haemodynamic stress as these sheer forces lead to adaptive intimal thickening best described as fibromuscular proliferation [7]. Initially focal clumps of mineralised regions may develop at basal intimal regions immediately adjacent to the media. Over time these foci may undergo osseous metaplasia, and contain hematopoietic marrow, osteoblast-like cells, chondrocyte-like cells, multinucleated osteoclast-like cells. These foci also contain proteins typically associated with bone metabolism and not expressed in normal arteries [5].

Currently, controversy remains regarding whether vascular calcification is a cause or consequence of cardiovascular disease. Current evidence suggests both: a consequence as atherosclerosis induces cellular osteogenic differentiation; and a cause as vascular calcification stiffens arteries and alters plaque stability resulting in a compliance mismatch at the rigid mineral and distensible artery wall interface. Under mechanical stress (i.e turbulent flow) this interface has an increased risk of mechanical failure (e.g. plaque rupture) [7].

Given the adverse consequences of dysregulated biomineralisation, calcium-phosphate metabolism is tightly regulated, and mineralisation localised to the skeleton by endocrine and paracrine signals. Therefore any mineralisation outside the skeleton was historically viewed as a passive degenerative process [7]. Current research suggests otherwise; that vascular calcification, like osteogenesis, is a balance between activators and inhibitors. It is postulated that vascular calcifications arise from developmental programmes responsible for embryonic ossification but now modulated by inflammatory or metabolic phenomena. Chronic oxidative stress alters the inflammatory response of vascular cells, causing them to display lineage plasticity [7]. The strongest evidence for this is the presence of bone-like tissue in atherosclerotic arteries and valves. When pathologists surveyed such lesions, cells from all stages of endochondral ossification, hematopoietic cells, vascular sinusoids, marrow adipocytes, and marrow stromal cells were noted [7]. This empirical evidence suggests that mesenchymal cell plasticity has a significant active role to play in the process of vascular calcifications. 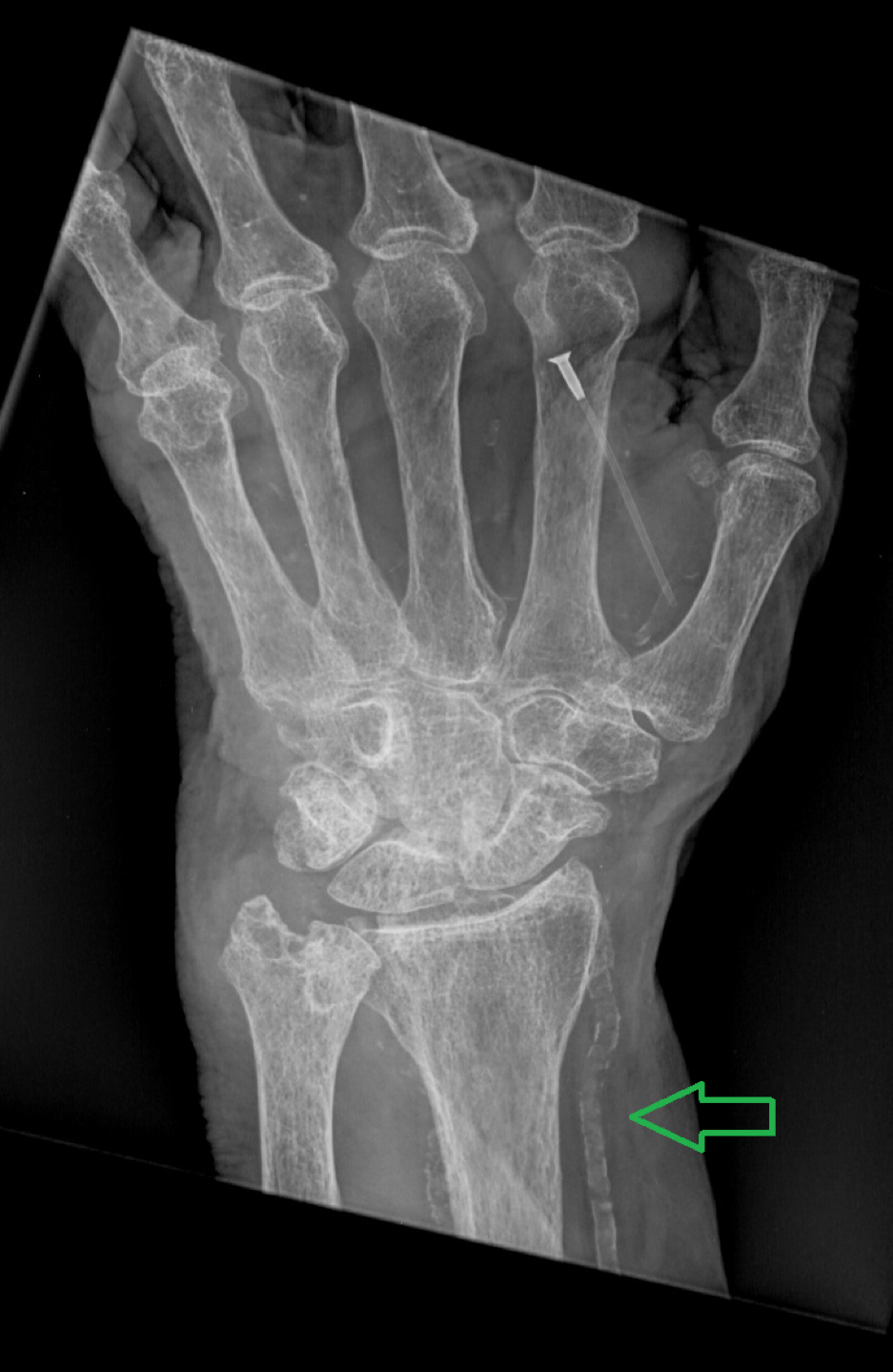 Figure 2: Anterior-posterior left wrist radiograph. Note the extensive calcifications highlighting the course of the radial artery as shown by the green arrow.