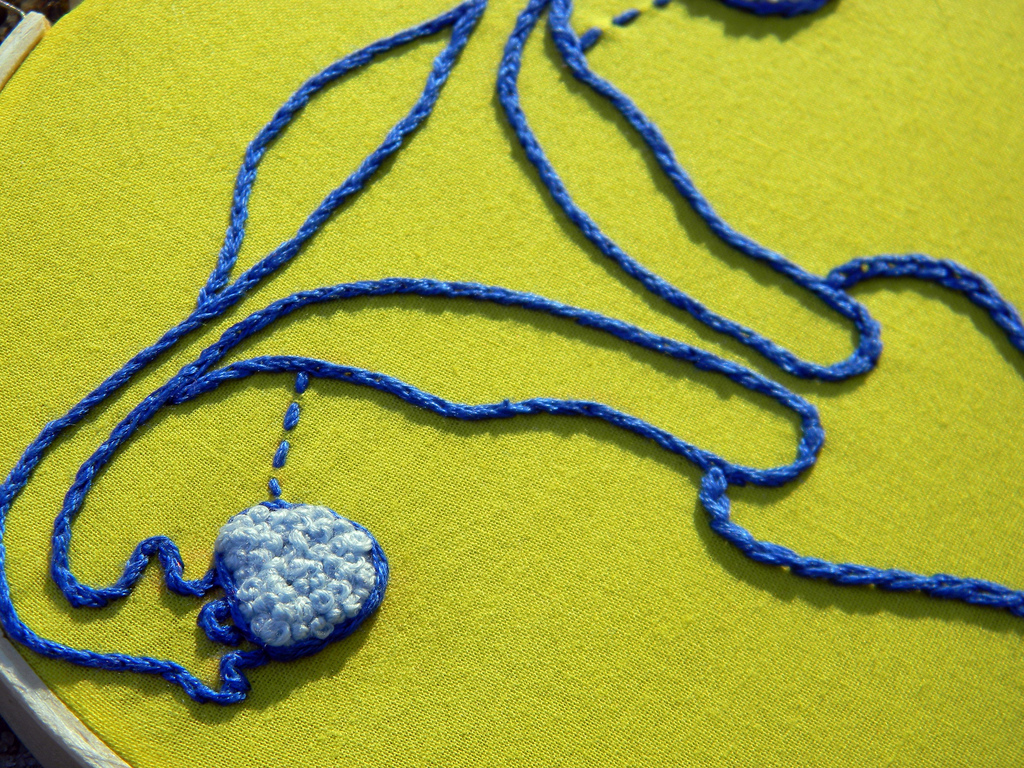 EC is the most common gynaecological malignancy in developed countries [4] and accounts for 9,100 new uterine cancer cases in the UK every year [5]. The incidence is projected to fall by 7% in the UK between 2014 and 2035, but other studies have reported an increased incidence due to the ageing population [4]. The risk factors for CAH are similar to those for type 1 ECs, which are oestrogen dependent and are associated with a favourable prognosis.

The Royal College of Obstetricians and Gynaecologists (RCOG) published guidelines for the management of endometrial hyperplasia in 2016 [3]. EH is diagnosed by endometrial sampling by biopsy or curettage. This sample may also be taken from a polyp or other discrete lesions. However, this warrants further investigation via hysteroscopy for direct visualisation and biopsy of the uterine cavity [1]. Moreover in a significant minority of cases, EC also co-exists with CAH on pathological evaluation of hysterectomy specimens undertaken for CAH. Addenbrooke’s Hospital local guidelines advise direct visualization of the uterine cavity, via hysteroscopy, for all women being investigated for potential endometrial abnormalities.

The RCOG guidelines for treatment of CAH recommend total hysterectomy as the gold standard due to the risk of underlying malignancy or progression to cancer, with post-menopausal women offered concomitant bilateral salpingo-oophorectomy. However, this is not suitable for all patients due to comorbidities, fertility status and patient preference. For those opting for fertility-sparing treatment, pre-treatment investigations to rule out invasive EC or metastases should be carried out. Treatment decisions for those not undergoing hysterectomy should be discussed in a multidisciplinary team. Recommended first line treatment for CAH is insertion of a progestogen containing intrauterine system (Mirena IUS). If this is declined or not suitable then oral progestogens should be commenced.

The objectives of this descriptive study were to analyse the patient demographics and treatment decisions of patients with a positive histopathological diagnosis for CAH of the endometrium. Secondly, to determine whether there was an increase in the incidence of CAH due to the use of the MyoSure procedure, as it is potentially better at performing biopsies as it provides a morcellated specimen, meaning that the pathologist is able to examine more fragments. In this study, we compared women with CAH treated definitively with hysterectomy and those treated conservatively, and reported their follow-up outcomes.

We retrospectively studied patients who had a confirmed diagnosis of CAH whose diagnosis and management had been discussed at the Addenbrooke’s gynaecological oncology specialist multidisciplinary meeting. All patients who had been diagnosed with CAH between November 2014 and November 2017, and who were managed at Addenbrooke’s Hospital, were identified using clinical coding details. Patients from regional referral hospitals were not included as we were unable to readily access follow-up data. Using electronic patient records, we collected data from each patient, including age at presentation, Body Mass Index (BMI) and presenting complaint. Clinical outcomes and histopathological characteristics were compared in patients treated with and without hysterectomy.

During the time period studied, there were a total of 66 patients with biopsy-proven complex atypical hyperplasia from endometrial sampling. A summary of the basic findings can be found in Table 1.

There were 66 patients overall; 4 at the end of November 2014, 11 in 2015, 23 in 2016, and 28 in 2017 (excluding December). Statistical analysis was not performed on this set of data, as the study was limited by small numbers, meaning differences were unlikely to be identified, and the baseline referral rate was also unknown.

The number of premenopausal patients which presented in this study was higher than usually quoted, some patients were therefore investigated for Lynch syndrome, by carrying out immunohistochemistry for mismatch repair proteins on the pathology sample. However, none of the premenopausal patients in the study had Lynch syndrome. Typically Lynch syndrome accounts for between 3-5% of endometrial cancers, however routine testing for mismatch repair proteins in women with endometrial cancers currently was not the standard of care. This may change in the NHS in the future [7]. In our centre, a case-by-case approach was adopted, and testing may be recommended for women with risk factors associated with Lynch syndrome, such as younger age, family or personal history of Lynch-associated tumours. As we do not currently offer testing for all women with EC or CAH, the frequency in our population is unknown. 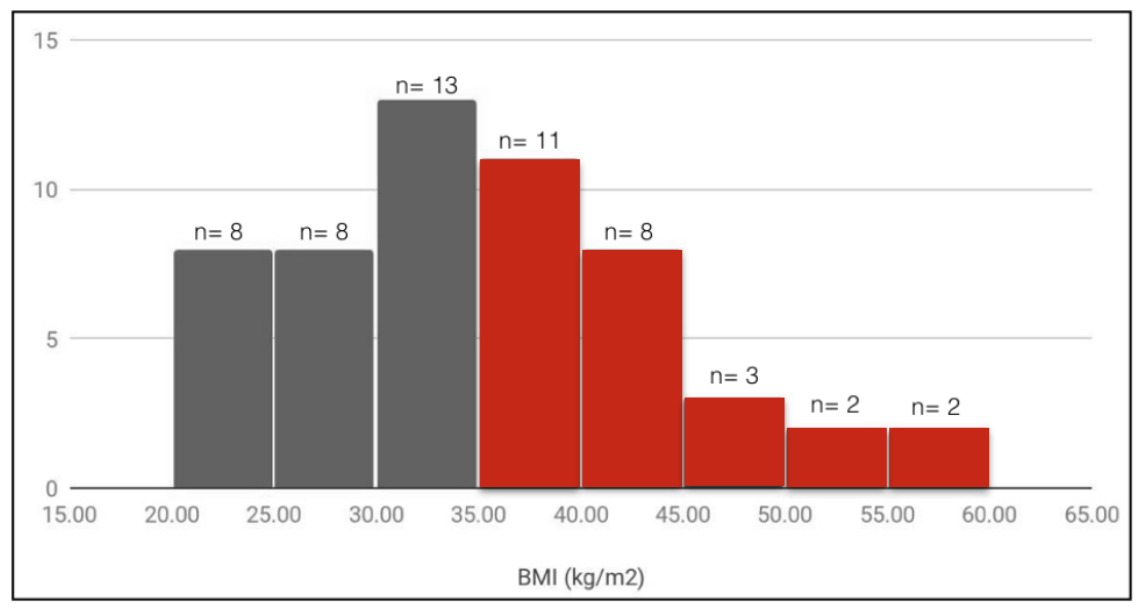 All patients were initially biopsied in the outpatient setting, although 6 had to be repeated under general anaesthetic and 11 patients underwent polypectomy using the MyoSure procedure.

9 endometrial biopsies (13.6%) were reported as ‘insufficient for analysis’, and a further 2 were described as ‘scanty’ on the first biopsy report, but upon removal of the polyps, they were found to show CAH.

Of the CAH biopsy reports, 44 reported a clear diagnosis of CAH, 2 were reported as ‘suspicious of’ CAH, and 10 reported that in the sample the pathologist was unable to exclude additional endometrial malignancy.

In this sample, 38 patients proceeded straight to hysterectomy, and 58% had a confirmed CAH, and 26% had EC, 8% were not yet known as the surgery were delayed due to clinical reasons (n=2) or the results were not on the system (n=1). 12 of the patients proceeding straight to hysterectomy had CAH confined to a polyp. The final histological outcomes from all of these 12 patients was benign, showing no further dysplasia or evidence of malignancy. 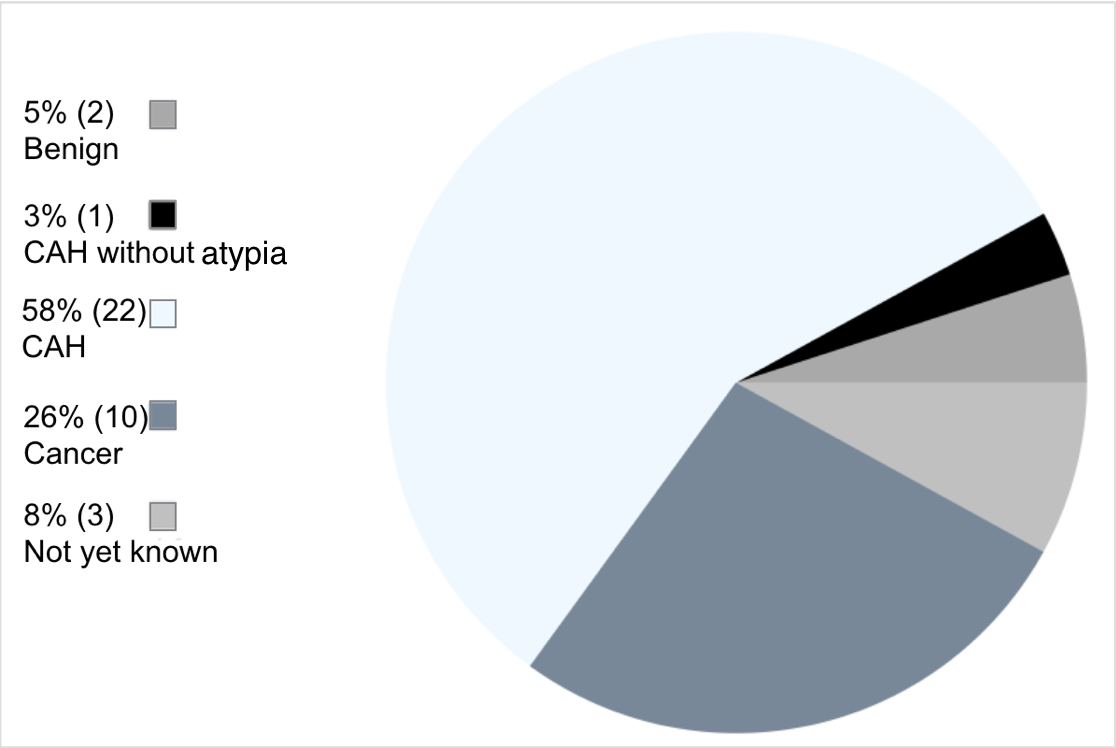 The remaining 28 (42%) patients underwent conservative treatment, most commonly a Mirena IUS (n= 23). Other options included oral progestogens (n= 3) and watch and wait (n= 2). The documented reasoning behind a conservative treatment approach were mostly related to BMI and comorbidities that would hinder a surgical approach (n=11). Other reasoning included preserving fertility (n=4), patient preference (n=9) or the CAH being confined to a polyp (n=4). It was important to recognise that the decision to proceed with either a surgical or conservative approach was highly individualised, and therefore there are no absolute contraindications to surgery. Conditions such as morbid obesity, poorly controlled diabetes, poor performance status, high American Society of Anesthesiologists (ASA) grade would also be taken into consideration when formulating a treatment plan for each patient.

Of the patients lost to follow up, it was not clear whether no further follow up was arranged or the patients did not attend subsequent appointments, as there was no documentation in the medical records. Reasons for hysterectomy included the inability to tolerate oral progestogens, ongoing vaginal bleeding, and simply changing their mind in the face of persistent CAH biopsies.

Of the conservatively managed patients, 14 had CAH confined to a polyp. None of these progressed to malignancy, and 9 regressed to benign biopsies.

11 patients had undergone the MyoSure procedure and their CAH was confined to a polyp. Of these 11, 8 underwent immediate hysterectomy. The final histology after hysterectomy confirmed CAH in 5 patients, endometrial carcinoma in 1 patient, and benign histology in 1 patient. The other 3 patients who had the MyoSure procedure were managed conservatively, 2 patients had persistent disease and 1 patient was discharged as they had a benign histology.

Table 2: Summary of disease progression and outcomes of conservative treatment.

The findings of this study were in line with the current literature stating that postmenopausal women with higher BMIs were at a higher risk of developing CAH [4], and that this often presented with postmenopausal bleeding. The diagnosis of CAH in patients in this study were mainly based on biopsies performed during outpatient hysteroscopies. Of these patients, just over half underwent a hysterectomy immediately after, as per the RCOG guidelines [3], and the rest opted for a conservative management. This was chosen predominantly because of other medical comorbidities such as high BMI.

The extent of CAH varied from confinement to a polyp, to spread throughout the endometrium. Of the patients who were managed conservatively with CAH confined to a polyp, and had their polyp subsequently removed via MyoSure/polypectomy procedure displayed no evidence of disease at follow-up appointments. This finding may suggest that the MyoSure procedure could potentially be used as a possible treatment for patients with CAH confined to the polyp, and should be explored further as a possible management option for this patient subset. In those patients with spread endometrial CAH managed conservatively, most were being followed up, with less than a tenth being discharged, and just over a fifth going onto have a hysterectomy.

The third objective of this study was to assess whether more cases of CAH were being diagnosed since introduction of the MyoSure procedure for polypectomy. There is very little literature surrounding the efficacy of the MyoSure procedure, but it has been shown to be an effective way of managing endometrial polyps in the outpatient setting, with a high level of patient satisfaction [6]. The first patient on our list to have undergone the MyoSure procedure was in November 2016. However, the upwards trend in the number of CAH patients seemed to have started before this point. Speculatively, this could be due to other factors, such as higher BMIs, and the increased use of hormone replacement therapy over the years. Further studies we would recommend include a longitudinal follow up of the women undergoing the conservative treatment to assess whether this places patients at the same risk of developing EC as age-matched controls with no history of CAH, and a study to determine whether the MyoSure procedure was capable of detecting subclinical CAH, as morcellated specimens were sent to pathology.

We would like to thank the whole Gynaecological Oncology team for welcoming us to their team. We would particularly like to thank Helen Bolton for her guidance and support during the duration of this project.