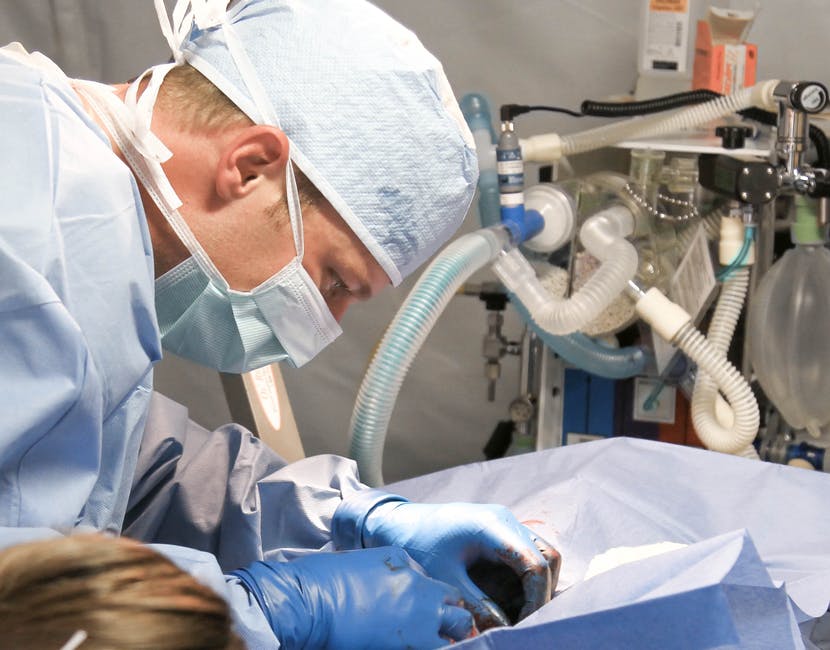 Lower gastrointestinal (GI) bleeding is a common cause for presentation in the elderly with a mortality rate between 1 and 5% [1]. The most common cause for the bleeding is diverticular disease whereas polyps are rarely found to be the cause [2][3]. A variety of measurements have been proposed to predict the severity of the bleed [4][5] and look mostly at heart rate, blood pressure, coagulation state and co-morbidities. Diagnosis of the source of bleeding is usually made by colonoscopy or angiograpy/radionuclide scintigraphy [1] with the obvious challenges of the requirements of bowel preparation for colonoscopy potentially delaying diagnosis.

A 37 year old female with no previous medical history presented to the emergency department (ED) in a rural Australian hospital with a new onset of per rectum (PR) bleeding which had been ongoing for the last 6 hours. Her history was one of intermittent occasional PR bleeding and some changes in her bowel habit over the last 2 years. Her only regular medication was the oral contraceptive pill. On initial assessment at triage, her observations were stable (HR 90, BP 125/60, RR 16, 98% on room air). A group and hold was stored (the pathology lab was not open due to weekend staffing) and a full blood count was sent.

On further questioning, she reported that the bleeding only occurred upon passing stools which had become more loose that day. She reported that she had felt a mass prolapse earlier today but thought it had reduced itself – at the time she had assumed it was a haemorrhoid. She denied any abdominal pain.

The initial haemoglobin (hb) was 12.2g/dl and the patient was triaged as category 3 as her observations were stable and there was no reported ongoing PR bleeding. She was later assessed by an ED doctor who called the off-site surgical registrar to attend to the patient as she had had a syncopal event in the assessment bay with renewed PR bleeding, hypotension (84/50) and tachycardia (125). Her abdomen was again noted to be soft and non tender.

She was moved to the resuscitation bay and the bloods were repeated showing a drop in hb to 7.2g/dl. Active crystalloid resuscitation was commenced whilst awaiting the grouped blood – however as the patient was only showing minimal response to the IV fluids, a decision was made to give the patient 2 units of O- blood whilst awaiting her group type. A massive transfusion protocol was put out and the patient received 4 more units of blood and 2 units of Fresh Frozen Plasma (platelets had be sent from another hospital). There was also limited supplies of blood in this hospital meaning she only had 2 units of A+ (her blood group) before having to use O+.

The patient was moved to the operating theatres (OT) and the surgical specialist after discussion with a senior colleague elected to start with a flexible colonoscopy given the radiological findings. A complete colonoscopy was performed which showed blood and fibrin clots all the way to the hepatic flexure. The ascending colon and the caecum were however spared and normal fecal debris was found there. On removal of the scope, no masses were noted except in the posterior wall of the rectum where Photo 1 was taken. Due to the size (about 4 x 4cm), malignancy was considered and the mass was hot-snared in piecemeal fashion and sent for histopathology.

Photo 1. Mass noted in the rectum on colonoscopy. 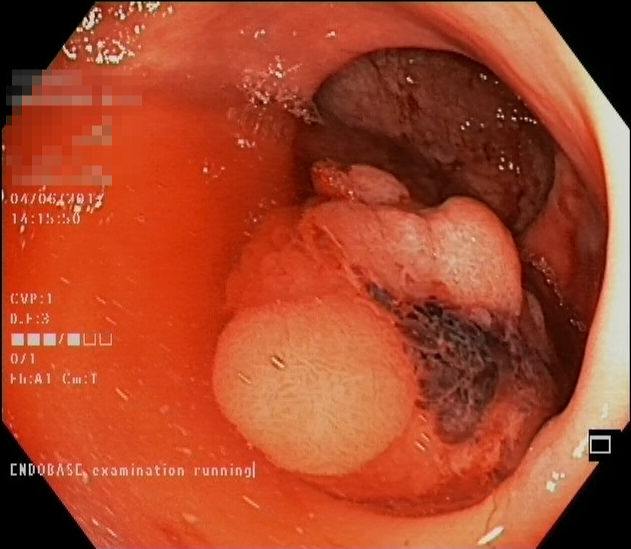 After surgery, the patient was stabilised in the intensive care unit (ICU) but did not require any inotropes. Twenty-four hours later, she was discharged from ICU to the ward and then discharged home three days after presentation. The final report showed a tubulovillous adenoma with low grade dysplasia. A repeat colonoscopy six weeks later showed a clear base and no further growth in the area. Six months later, the patient underwent transanal minimally invasive surgery (TAMIS) with wide local excision of the scar. This also showed no malignancy.

Admission to hospital for PR bleeding is very rare for a patient in their 30s – there is a 1/100000 hospitalisation rate for acute PR bleeding [6] whereas the admission rate goes up 200 fold by the time the patient reaches their ninth decade [6].

The most common cause in the West is diverticular bleeding which make up a quarter to half of all the cases [1] followed by ischaemic colitis (6-18%) [1]. Polyps are rarely a cause of PR bleeding – most research puts this at between 3 and 6% [2][3]. Angiodysplasia is also similarly rare (1-3%) [1].

The Oakland score has been created and validated to score patient’s risk in the setting of a lower GI bleed [5]. It uses age, gender, presence of blood on PR, previous lower GI bleed, HR, BP and hb to generate a score which then allows the clinician to predict safe discharge. A score of 8 or lower was deemed acceptable for discharge home as it represents 95% chance of safe discharge. The score for this patient on initial presentation would have been 14 (77-81% chance of safe discharge) but increased to 26 (20-28%) after the collapse. Based on this scoring system, this patient was marked out as a someone who would have warranted admission and monitoring.

We elected to perform the colonoscopy without bowel preparation due to the initial instability of the patient. This has been argued to increase the perforation risk and tends to have a lower completion rate but still has a yield of around 78% [7]. We were directed by the imaging that had indicated that the likely cause of the bleeding was low in the rectum, meaning we had a location that was relatively accessible with the colonoscope and had no access to interventional radiology.

Although rare, severe lower GI bleed should be considered as differential in patients who present with what initially can sound like a haemorrhoidal bleeding. As this case demonstrates, a lot of the bleeding can be occult and overlooked until the patient has become profoundly shocked. The rapid deterioration noted in this case was most likely due to the patient’s age and overall fitness suddenly causing them to rapidly decompensated.