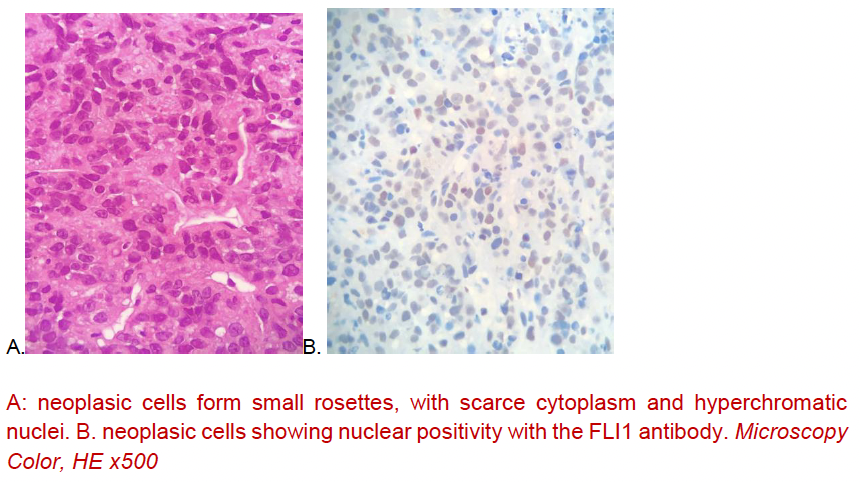 Objectives: To report a rare case of Ewing's gallbladder sarcoma with liver metastasis

Ewing's sarcoma (SE) and primitive neuroectodermal tumor (PNET) are part of the family of Ewing's sarcoma tumors1,2. They are considered primary malignant tumors of small round cells of bone and soft tissue1. SE and PNET should be seen as two variants of the same tumor that differ only in their degree of neuronal differentiation, since they share an identical chromosomal translocation2. Tumors that demonstrate neuronal differentiation are considered PNETs, and those that are not differentiated are diagnosed as SE3. The Ewing sarcoma family of tumors occurs most commonly in soft tissues of the extremities and in the paravertebral areas. Extra-skeletal ES occurs more frequently in patients under 30 years of age, while PNET occurs more in patients 3 over 40 years of age2,4. ES and PNETs have already been reported in unusual places such as skin, soft tissues and viscera, for example, the pancreas1,3. In this report, we present a case of primary SE / PNET in the gallbladder with hepatic metastasis diagnosed from immunohistochemical findings. It is a rare, metastatic finding in the gallbladder in adults.

Male patient, 58 years old, without comorbidities, smoker (> 50 pack / year), came to the general surgery service of Hospital São Vicente de Paulo (Passo Fundo- Brazil) with abdominal pain in the right hypochondrium for a month and a half. He reported in the consultation asthenia, anorexia, nausea, jaundice and weight loss of 10 kg without alteration in the diet. On physical abdominal examination, a palpable mass was identified in a hardened liver topography and a negative Murphy maneuver. For evaluation, the medical team requested laboratory tests which identified hypercalcemia, an increase in canalicular enzymes and a slight increase in liver enzymes. Tumour markers CEA (4,8ng/mL) and CA 19.9 (36 U/mL) within normal limits. The medical team requested a CT scan of the abdomen that showed the liver with preserved dimensions and heterogeneous density. In the topography of segment IV, in a just-hilar situation, it presented a voluminous hypodense, lobulated, heterogeneous mass, measuring 8.5 x 8.4 cm, with heterogeneous contrast impregnation and diffuse gallbladder parietal thickening (1.6 cm It still had material compatible with cholelithiasis and in combination, several hypodense nodular formations, with solid density, diffusely arranged along the hepatic parenchyma.The peripheral contrast impregnation, especially arterial, suggested secondary neoplastic implants in the topographies of segments III (1,9 x 1.8 cm), II (2.0 x 1.3 cm) and VI (1.2 x 1.2 cm). Based on the exams, the hospital's general surgery medical team suspected gallbladder neoplasia Continuing with the investigation, he performed a liver biopsy which showed round cell neoplasia (Image A), and in the immunohistochemistry exam, diffuse vimentin, multifocal synaptophysin, focal CD99 and multifocal FLI-1 were found (Image B). the patient quickly evolved to a severe condition of paraneoplastic hypercalcaemia and subsequent death before the diagnosis was confirmed and treatment started4.

Although tumours of the Sarcoma Ewing family correspond to approximately 6% to 10% of primary malignant bone tumours and follow osteosarcoma as the second most common group of bone sarcomas in children, reports of extra-skeletal SE / PNETs are rarely reported1,4,10. Currently, there is no research in the area for adults with this pathology. As far as we know, this case is only the third reported case of SE / PNET in the gallbladder, the first being metastatic.