We report a paediatric case of a 6-year-old girl with neurofibromatosis type 1 (NF1) who presented with easy bruising and gum bleeding. Following diagnosis and treatment as pre-B cell acute lymphoblastic leukaemia (pre-B ALL) the patient developed an acute myeloid leukaemia (AML) which was refractory to all available curative therapies. The molecular findings include monosomy 7 on a background of NF1. The peripheral monocytosis leads us to believe that this patient may have transformed via a juvenile myelomonocytic leukaemia (JMML) which subsequently transformed into a refractory AML. It is likely that her molecular defect was at a stem cell level. The low survival rate of JMML, the inability to get the patient to transplant due to refractory disease and the combination of poor prognostic factors (>2 years old and high HbF for age) may help explain the difficulty in her management.

A 6-year-old girl presented with easy bruising and gum bleeding. Her past medical history was significant for NF1 and 4 lesions of juvenile xanthogranulomatoses. There was an extensive family history of cancer; the mother had cervical cancer and the maternal grandmother had AML, ovarian cancer and breast cancer. On examination the patient had smooth hepatosplenomegaly and lymphadenopathy in the supraclavicular, infraclavicular, axillary and inguinal regions. A full blood count revealed red cell count 3.31 x 1012/L, haemoglobin 108g/L, platelets 62 x 109/L, MCV 99.6fL, white cell count 15.9 x 109/L, lymphocytes 7 x 109/L and monocytes 2.39 x 109/L. The peripheral blood film was leucoerythroblastic with 30% circulating blasts. These blasts were large with basophilic cytoplasm and no granulation. The bone marrow aspirate showed hypercellularity and a prominent blast population of 80% with markedly reduced erythropoiesis, myelopoiesis and megakaryopoiesis. Flow cytometry of the bone marrow revealed that the blast cells expressed B lymphoid lineage associated antigens (Figure 1) and hence the patient was diagnosed with pre-B ALL. In addition, cytogenetic analysis discovered a monosomy 7 chromosomal abnormality which is associated with poor prognosis in B cell leukaemia.

The patient commenced induction with regimen A of the UKALL2011 trial which includes treatment with vincristine, pegaspargase and dexamethasone. Post-induction the patient developed status epilepticus; T2 MRI head imaging showed lesions on the deep white matter of the cerebellum and basal ganglia which after neurology review were said to be consistent with lesions found in NF1. The patient was advised to continue anti-epileptics through the rest of induction and the patient suffered no further seizures. At the end of induction the bone marrow was hypercellular with 6% myeloid blasts by flow cytometry but no excess of lymphoid blasts (Figure 2). The myeloid blasts expressed CD34, CD13, CD33, CD117 and HLA-DR. The analysis for minimal residual disease (MRD) was as low risk.

UKALL2011 R2 randomisation was declined, so the patient received standard IM and pulses for maintenance therapy. Six months into maintenance a routine blood film revealed neutropenia and monocytosis with the occasional promonocyte and some platelet clumps. Flow cytometry of the bone marrow found the same CD34+ CD13+ HLA-DR+ expression profile of myeloid blasts that were found post-induction however now at a count of 30%. A retrospective FISH of the day 29 (post-induction) bone marrow aspirate showed that 84% of blasts were positive for monosomy 7. The patient was given salvage chemotherapy in the form of FLA-Ida with the plan to reassess at count recovery aiming for stem cell transplant. Two months later the bone marrow aspirate indicated refractory disease with 30-50% blasts and a reduced number of mature myeloid cells and abnormal monocytoid cells. Flow cytometry found 32% myeloid blasts and immature B cells with a similar phenotype to the lymphoid blasts found at diagnosis. The patient was given clofarabine, cyclophosphamide and etoposide. The disease returned with 60% blasts and the patient was discussed nationally, after which myelotarg, vincristine and dexamethasone were given. Unfortunately this last attempt at cure was unsuccessful as one month later the disease had persisted with 56% myeloid blasts in the marrow. Etoposide was used in the palliative setting and the patient sadly died two months later in a hospice.

JMML is a rare and aggressive mixed myeloproliferative/myelodysplastic disorder. It is more common in males and the majority occur in children under 2 years of age. 15% of cases are associated with neurofibromatosis type 1 (NF1) and there is also an association with Noonan syndrome. Differential diagnoses include reactive monocytosis, AML, CML and other myeloproliferative/myelodysplastic syndromes. The prognosis of JMML is poor with a variable course and it is also notoriously difficult to treat; chemotherapy and donor lymphocyte infusion are ineffective. [1] Stem cell transplantation (SCT) is the mainstay of treatment. 50% of SCT treated patients will relapse (usually 2-4 months post-transplant) after which a second transplant is indicated which has a similar success rate. [2] It is thought that the graft vs leukaemia quality of SCT may contribute towards its curative potential. [3]There is good reason to believe that our patient may have fulfilled the criteria for JMML according to her investigations post-induction therapy. According to the WHO 2017’s guidelines (Figure 3) she fulfilled all the clinical and haematological criteria, presenting with splenomegaly, peripheral monocytosis, $<$20% myeloid blasts and absence of the BCR/ABL fusion gene. She also had a clinical diagnosis of NF1 and from the retrospective FISH possessed the monosomy 7 chromosomal abnormality. Furthermore, she was found to have an increased HbF for age and a leucoerythroblastic peripheral blood film. The significance of NF1 and JMML comes from our current understanding of its pathogenesis which is linked to the mutation of various proteins in the Ras pathway, including SHP-1, CBL, NF1, KRAS and NRAS (Figure 4). However, this post-induction picture of myeloid disease does not tally with the initial presentation which was predominantly lymphoid.

Figure 3. WHO (2017) criteria for the diagnosis of juvenile myelomonocytic leukaemia. 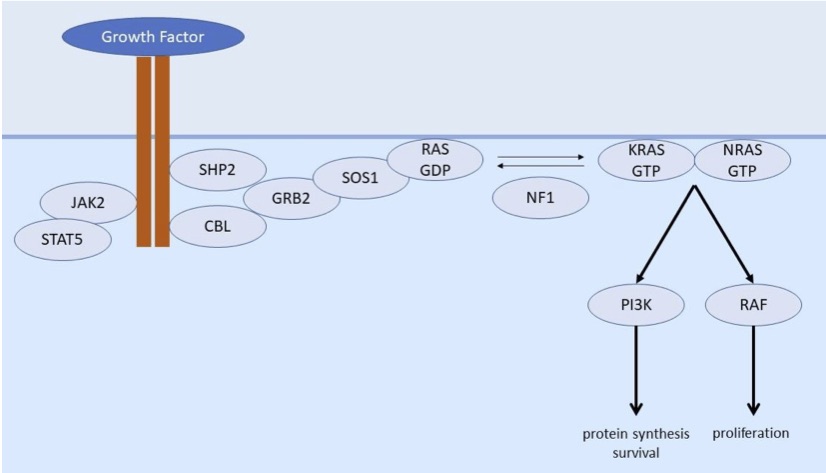 Figure 4. RAS/PI3K/MAPK growth signalling pathway, within which many components such as SHP2/PTPN11, CBL, NF1, KRAS and NRAS may all be mutated in those who develop JMML.

Cases of paediatric leukaemia involving malignancies of both the lymphoid and myeloid lineage are rare in the literature. There are examples of phenotypic shift from ALL to AML in patients who were positive for monosomy 7 in leukaemia cells both at diagnosis and at relapse [4][5] which suggests that this aberration may arise in an early multipotent progenitor cell which has not yet differentiated into a myeloid or lymphoid lineage. Where this patient differs from previous cases is the background of NF1 and the link to JMML – it raises the question of whether NF1 patients are more likely to exhibit phenotypic shift post-induction. Our case and others all relate to the concept of preleukaemia – that leukaemia may begin as mutations or chromosomal abnormalities in stem cells early in the haematopoietic tree. This has been investigated through twin studies and targeted sequencing of leukaemic cells. [6][7] In the case presented here, the monosomy 7 aberration was common to both the malignant lymphoid and myeloid blast populations, suggesting that our patient’s disease may have originated from a preleukaemic stem cell. This may explain the difficulty in achieving remission, as preleukaemic stem cells are thought to be reside in the bone marrow, resisting death by chemotherapy and acting as a reservoir from which leukaemia can relapse. [7] After the course of FLA-Ida our patient had regenerated the CD22+, CD79a+, CD10+ abnormal lymphoid blast population from initial diagnosis, suggesting that they had never been fully eradicated.

This case raises questions as to how we can attempt to treat patients like this in the future. JMML has several known poor prognostic factors including age $>$2 years, increased HbF for age and platelets $<$33 x 109. [8] Our patient was positive for the former two. It is known that those with Noonan syndrome, germline PTPN-11 mutations, germline CBL mutations and some somatic N-Ras mutations may benefit from a watch-and-wait style management as these patients tend to spontaneously remit. However, those with NF1, somatic PTPN-11, somatic K-RAS and the majority of N-RAS mutations ideally require allogeneic SCT. In the EWOG-MDS/EBMT trial, patients with $>$20% blasts had a 0% event-free survival (EFS) however on multivariate analysis which looked at variables influencing EFS, the relative risk of $<$5% vs $>$20% was not statistically significant, so it is not clear if this is a useful way to stratify patients. [9] Some have suggested that patients with transformed AML from JMML should have access to experimental therapies before attempting transplant due to their poor outcomes. [10] Although our patient was unsuccessfully treated with a course of the relatively novel drug myelotarg as the last curative option, management options must continue to weigh the benefit of continuing chemotherapy with the impact on quality of life for the patient.The future of JMML treatment may include targeted adjuvant chemotherapy in addition to SCT. The role of epigenetics is being investigated, with some groups identifying an association between the hypermethylation of genes regulated by RAS signalling and the upregulation of DNMT1 and DNMT3B. Nucleoside analogues which inhibit the action of DNMTs may help to control disease before transplant. [11] Further research is required to find out how preleukaemic cells can be targeted and eliminated to prevent transformation into refractory acute leukaemia, after which curative options are very limited indeed.