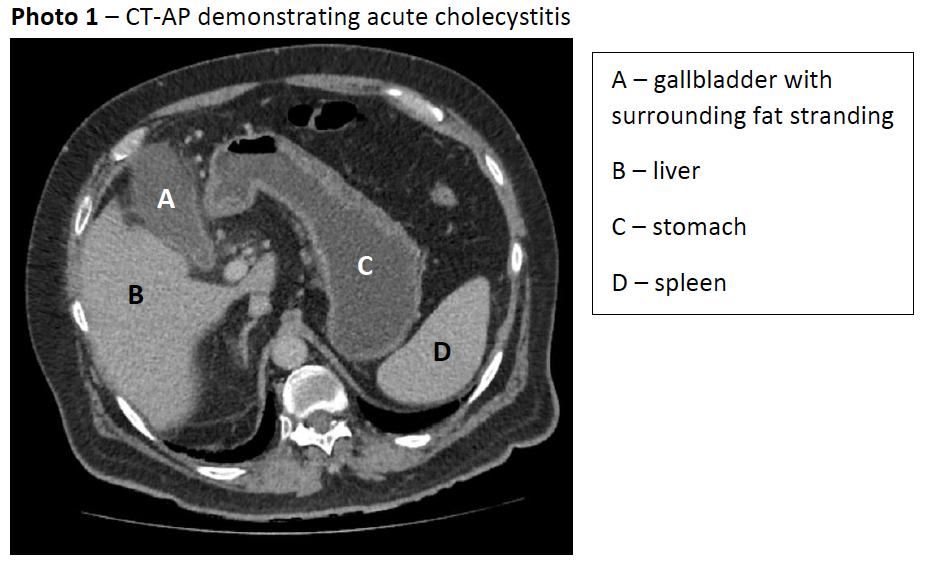 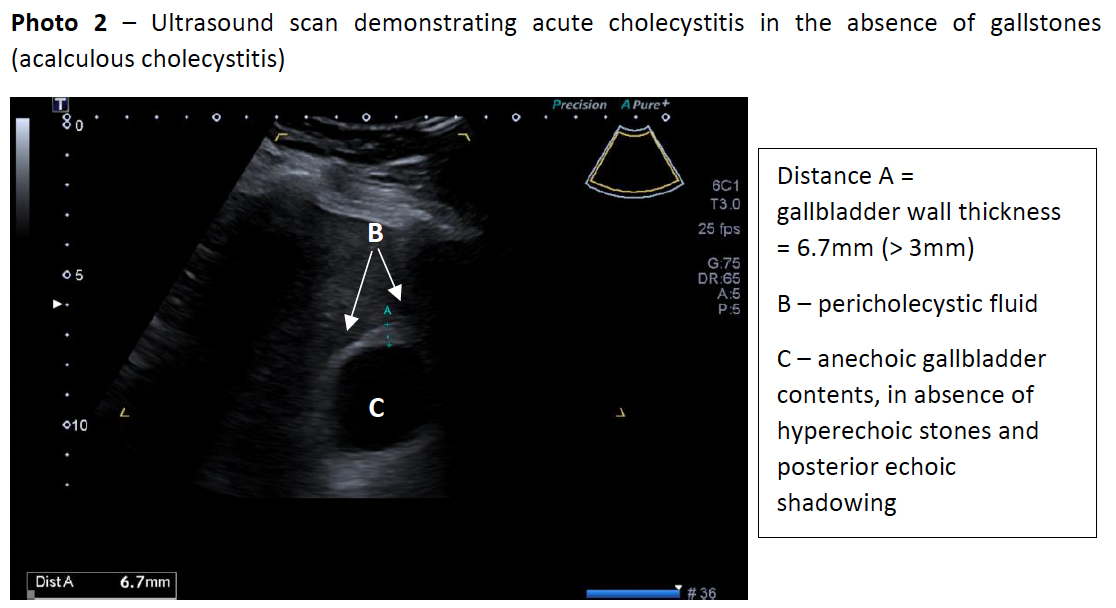 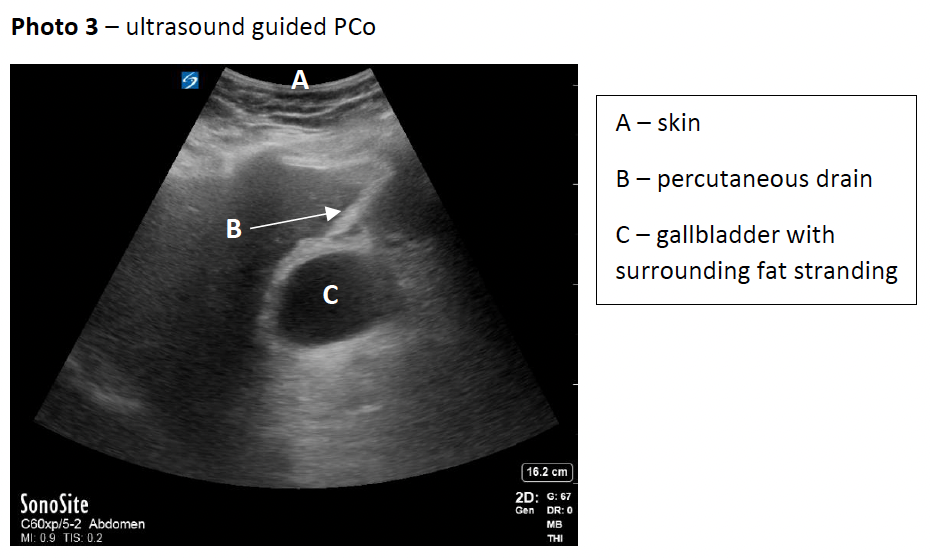 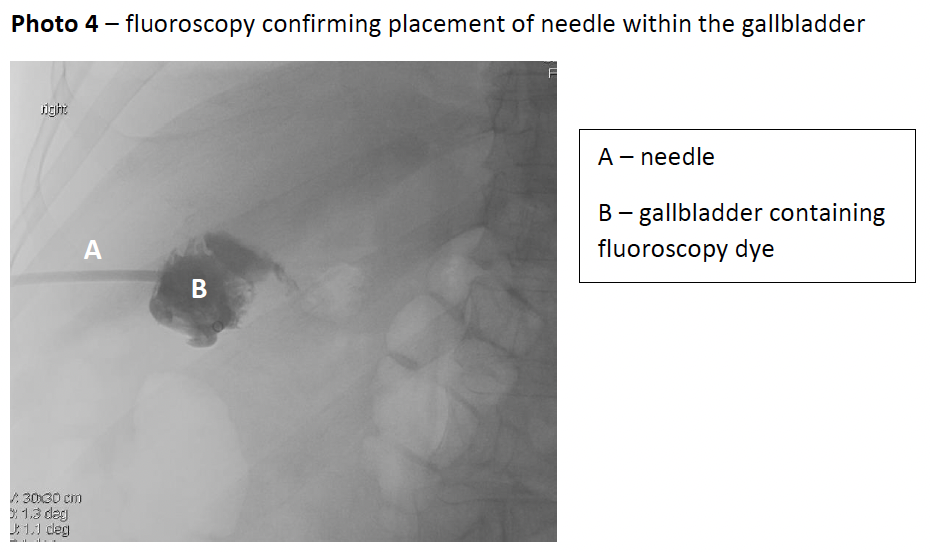 Background: Acalculous cholecystitis makes up only 5-10% of all acute cholecystitis presentations and typically occurs in unwell patients with comorbidity.

Case Presentation: We herein report the case of an unwell 73-year-old male presenting to a rural 148 bed hospital from home with three days of fevers, chills, vomiting, and right upper quadrant pain. He had a CT and an ultrasound scan demonstrating acute acalculous cholecystitis (AAC). His antiplatelet medication was withheld in anticipation of intervention, however, due to worsening respiratory function from congestive cardiac failure (CCF) and underlying comorbidity he was transferred for urgent percutaneous cholecystostomy (PCo) and management in a larger high dependency unit (HDU), unavailable at the initial hospital.

Management and Outcome: The patient recovered from AAC with PCo and responded to furosemide and negative fluid balance for his CCF. He was admitted to rehabilitation due to significant deconditioning and 6-week follow-up was organised post tube cholangiography to confirm cystic duct patency and absence of stones, with subsequent drain removal.

Discussion: This report explores the emerging consideration of PCo as definitive therapy in those normally considered for cholecystectomy, however, difficulty accessing interventional radiology in rural settings may complicate management.

AAC is a type of cholecystitis that occurs in the absence of gallstones, emerging from gallbladder ischaemia and hypokinesis, preventing it from emptying effectively which can predispose to superimposed infection1,2. It makes up 5-10% of all acute cholecystitis episodes1 and whilst it can present insidiously, it is most frequent in unwell hospitalised patients with risk factors such as burns, immunosuppression, major trauma, other infections/sepsis, mechanical ventilation, total parenteral nutrition, and diabetes mellitus2,3. High mortality rates of 30-50% thus exist and complications such as emphysematous cholecystitis, gallbladder perforation, and necrosis may occur4. It can be diagnosed with ultrasound or CT, both with high sensitivities and specificities. Definitive treatment requires removal of the source, either through cholecystectomy or percutaneous drainage. This surgical decision depends on patient comorbidities and imaging findings of complications (gall bladder perforation, necrosis, emphysematous cholecystitis)5. Certain organisms such as Klebsiella species, Enterococcus faecalis, Escherichia coli, Pseudomonas species, Proteus species, and Bacteroides fragilis are often associated with AAC6.

A 73-year-old male retired nurse with a significant medical history presented from home to a 148-bed rural hospital. He was unwell for the previous three days with fevers, chills, and vomiting associated with right upper quadrant (RUQ) abdominal pain but normal bowel habit and no per-rectal bleeding. He presented unwell [febrile (38℃), tachycardic (113), tachypnoeic (23), saturating at 90% on room air, with altered mental status (GCS 15)]. His examination demonstrated mild RUQ tenderness but no signs of peritonitis and a negative Murphy’s sign. He had an unremarkable chest x-ray with no chest pain or shortness of breath, sinus tachycardia on ECG, negative urinalysis, and no signs of skin or joint infection.

Whilst having a history of left pontine infarction and right leg deep vein thrombosis 2 years ago, hypertension, and Barret’s oesophagus for 6 years, he had none of the typical risk factors for AAC. He was on clopidogrel 75mg daily for his prior stroke, irbesartan, fluoxetine, pantoprazole, magnesium, cholecalciferol, and weekly risendronate. The patient had no relevant family history, and as a retired nurse lived 40km away in a rural town, using a walking stick to mobilise.

The patient was admitted to HDU under the general surgical team; IV ceftriaxone 1g BD and metronidazole 500mg TDS was commenced, and he was kept on a clear fluid diet, with IV fluids and fentanyl PCA for analgesia. His clopidogrel was withheld in anticipation of inpatient cholecystectomy within 72 hours.

On the first night in HDU, he was febrile to 39.4℃ and tachycardic to 124, requiring 2-3L oxygen for saturations of 95%. The next night he had desaturations to 80% requiring high-flow nasal cannula support. A chest x-ray revealed bibasal lung atelectasis and mild interstitial oedema, and a transthoracic echocardiogram demonstrated mild-moderate left ventricular hypertrophy and a mildly dilated left atrium and right ventricle. The patient had developed hypoxic respiratory failure secondary to collapse consolidation and grade 1 diastolic dysfunction. To manage his CCF he was put on a negative fluid balance by ceasing IVF and diuresis with furosemide. It was then clear that the likely cause of AAC stemmed from CCF producing a reduced effective circulating volume and thus gallbladder ischaemia and hypokinesia.

In the context of this cardiorespiratory compromise secondary to his multiple co-morbidities, the decision was made against cholecystectomy, opting for interventional radiology (IR) to perform an ultrasound guided percutaneous cholecystostomy (PCo). This required transfer to the HDU of a larger rural hospital 56km away due to lack of IR access at the initial site.

Despite only having ceased clopidogrel for 2 days, due the patient’s deteriorating clinical situation and lack of other options, PCo was performed under ultrasound guidance following a transhepatic approach (photo 3); the position was confirmed using fluoroscopy (photo 4), followed by a 12-French pigtail catheter insertion. Aspirated bile was sent for microscopy/culture/sensitivity which revealed gram-negative rods found to be Klebsiella pneumoniae sensitive to ceftriaxone.

He had an uneventful post-operative course in HDU with rapid improvement of his pulmonary oedema with furosemide. He received a total course of 7 days IV antibiotics and subsequent stepdown to oral cefalexin 500mg TDS and metronidazole 400mg TDS for a further 5 days. He was transferred back to the referring hospital and due to significant deconditioning, he was soon admitted under the rehabilitation team. Upon discharge he was followed up at 6-weeks with a progress CT-cholangiogram through the drain which demonstrated cystic duct patency and the drain was subsequently removed.

Unfortunately, the patient struggled with depression and negative feelings regarding his outcome and requiring a drain at discharge. He was serially reviewed by a psychogeriatrician with trials on various SSRIs, settling on venlafaxine. His mental health improved greatly on drain removal.

Subsequent cholecystectomy was planned but delayed due to readmission for a second stroke.

Definitive management of AAC can be broadly classified into two categories: percutaneous drainage and cholecystectomy.

In Australia, cholecystectomy is traditionally the preferred definitive treatment for AAC, however, gallbladder drainage is emerging as a safe, effective, and definitive alternative to invasive surgery7.

Whilst there is a lack of randomised trials in the area, a 2017 systematic review of five observational controlled studies and five case series found consistently higher mortality in patients undergoing PCo (10.6-26%) compared to cholecystectomy (0-12%). However, this was in the context of PCo patients being older, septic with shock, comorbid and with higher anaesthetic risk; wherein cholecystectomy would traditionally be avoided7. Despite this, the study found only 0-1.8% needing cholecystectomy after failed PCo, as well as reduced hospital stay and procedure cost with PCo compared to cholecystectomy7. The study would have been improved with multivariate regression analysis accounting for age and comorbidity when comparing mortality. A 2013 large multicentre case control study with 1,725 very unwell AAC patients demonstrated PCo showed no significant difference in mortality between PCo (2.6%) and cholecystectomy (2.1%), but reduced morbidity (5% vs 8%), intensive care unit admission (28.1% vs 34.6%), length of stay (7 vs 8 days), and cost8.

A 2020 retrospective cohort study involved 89 patients with AAC, with 41 being non-surgically managed (PCo or antibiotics) and 48 having cholecystectomy9. No mortality was recorded in either group but there was 9.8% recurrence in the non-surgical group, with mean time for recurrence at 23 ± 20 months. The non-surgical group had a much lower complication rate of 2.4% compared to 18.8% in the surgical group. This study needs more participants and separate analysis of PCo rather than combined analysis with antibiotic only patients to be truly useful.

A 2016 systematic review of 337,500 critically ill patients with AAC found mortality to be lower with cholecystectomy (OR 4.28) compared to PCo but with significant heterogeneity p<0.0000 and I2 98.75%10. Similar statistical and clinical heterogeneity was seen in measures of complications, length of stay, and reintervention which was attributed to variations in study population with age, sex, and comorbidities which were inconsistently reported and thus not accounted for in analysis.

In patients who are severely unwell or with significant comorbidity making them poor candidates for surgery, PCo is indicated2. Given the literature, it is clear further research including randomised trials are needed to better compare PCo and cholecystectomy for patients of similar age, comorbidity, and sickness who are equally fit for surgery. Despite this, low rates of subsequent rescue cholecystectomy following PCo have been demonstrated, suggesting definitiveness to this therapy7. In the meantime, in such patients without gallbladder necrosis/perforation/emphysema and fitness for surgery, the decision for cholecystectomy or PCo should be made from surgical and interventional radiology availability in addition to patient preference2.

In a rural context the availability of interventional radiology for PCo can however be difficult to arrange compared to metropolitan hospitals. It was not available in the referring hospital, necessitating transfer to larger centre. This can prove challenging in acutely unwell patients in more rural and remote areas, requiring immediate stabilisation and transfer. Similarly, the unavailability of immediate after-hours ultrasound led to delayed confirmation of AAC, thereby leading to treatment with antibiotics recommended for calculous cholecystitis (ceftriaxone and metronidazole) rather than acalculous (piperacillin and tazobactam)11. Whilst CT-AP did not show gallstones it is only 39-75% sensitive compared to 95% with ultrasound12. One promise of PCo is the ability for bedside applicability, especially useful in unwell individuals. This is not routine practice in Australia, but given rural shortages of interventional radiology, teaching of this technique to surgical trainees could be encouraged in order to prevent risky long-distance transfer of unwell patients in rural settings13.

PCo should be considered as a definitive treatment option for patients with AAC provided that appropriate follow-up is organised. This is particularly true in those who are deteriorating despite supportive therapy, are determined too unwell or unfit for surgery, and do not have gallbladder wall necrosis, perforation, or emphysema. Training in bedside PCo could greatly improve patient outcomes in rural settings, preventing transfer of unwell patients over long distances for interventional radiology.